About 70 Iron Range community leaders and local officials gathered to receive updates on Minnesota’s sulfate wild rice water quality standard. At the meeting, presenters provided an update about research that started in 2012.

U. S. Steel will adjust its iron ore pellet production in order to take full advantage of these business opportunities. Included in the adjustments is a restart of the Keetac Plant in Keewatin, Minn. Employee callbacks at Keetac will begin in early January 2017, and the company anticipates production will begin in March 2017.

The Keetac Plant, which has an annual production capacity of approximately six million net tons, has been temporarily idled since May 2015 due to global influences in the market, including high levels of imported steel products, unfair trade and reduced steel prices.

The Minnesota Pollution Control Agency (MPCA) recently released a draft water quality permit for Minntac’s tailing basin. As the people who live, work, and raise families on the Iron Range, the Iron Ore Alliance cares about our region’s pristine environment.

We appreciate the many workers and vendors who are participating in the public comment period for the MPCA’s draft permit, which is taking place through Friday, December 16. This is an opportunity to help others understand our record as an industry leader in environmental performance while preserving the hundreds of jobs that people of the Iron Range depend on to support their families and build strong communities.

We encourage you to learn about the permit, participate in the public comment period, and help make sure the MPCA understands our commitment to protecting the environment. In the past 10 years alone, we have invested more than $94 million in environmental improvements at our Minntac facility.

Comments can be submitted to:

The Range Association of Municipalities and Schools (RAMS) board of directors passed a resolution on October 27, 2016 calling for two things as the MPCA considers a new wild rice sulfate standard.

1. The RAMS resolution called for hearings in Greater Minnesota so that residents, community leaders, and business owners can participate in the process.
2. The group also asked that the timing of the cost analysis and the implementation of the rule be aligned so that the public can formulate sincere and honest reactions to the implementation of a proposed standard. Fee-payers, municipal wastewater treatment operators, and community and business leaders will have to manage the associated expenses to comply with a new standard.

Currently, the cost analysis is not expected to be complete until May 31, 2018, five months after the effective date of a newly proposed sulfate standard.

We are grateful to have had the opportunity to address the Laurentian Vision Partnership at its meeting on Oct. 19 . The IOA shares many priorities with this diverse group of regional stakeholders, such as sustaining good jobs, fostering economic growth, and protecting our environment.

As part of a joint initiative of U. S. Steel and USW that formed in February 2013 to provide a united, bipartisan voice on issues that impact iron mining, we shared an update about our work.

The IOA is focused on bringing people together to end illegal foreign steel dumping and establish a science-based water quality standard that safeguards wild rice while protecting the future of the iron mining industry – the backbone of Northeastern Minnesota’s economy.

These are challenging times for the Iron Range, and the IOA is proud to be an active participant in policy issues that impact the iron ore industry – because there’s no fight more worthwhile than standing up for the livelihoods of people who live, work, and raise families on the Iron Range.

The IOA brought more than 45 Iron Range leaders together on Oct. 19 to continue working toward a science-based water quality standard that safeguards Minnesota’s wild rice and protects the future of the iron mining industry. Local business leaders and representatives from municipalities received a comprehensive briefing on the issue, including information about the Minnesota Pollution Control Agency’s (MPCA) public comment period expected to begin in early 2017.

Speakers Kurt Anderson of Minnesota Power, Rob Beranek of Cliffs Natural Resources, and Chrissy Bartovich of U. S. Steel provided an update about ongoing research that commenced when discussions about the wild rice issue began in 2011. They also presented information about the potential costs to municipalities and industry on the Iron Range of complying with a sulfate water quality discharge standard. According to the speakers, potential costs to individual Iron Range cities could soar to millions of dollars. As a result, individual households could pay hundreds of dollars per year in new wastewater treatment fees.

Kurt Anderson of Minnesota Power presenting a briefing on research regarding the the wild rice issue on Oct. 19, 2016.

In attendance were federal and state Iron Range lawmakers, including Rep. Rick Nolan, Sen. David Tomassoni, and Rep. Rob Ecklund, who all applauded attendees for coming together to learn more about the issue and work toward a science-based solution.

Click here to read the Mesabi Daily News’ coverage of the event.

American steel companies and workers praised the ITC’s decision. U. S. Steel President and CEO Mario Longhi said the new tariffs are “yet another positive step towards establishing a level playing field,” vowing to continue efforts “to ensure fair trade and adherence to the rule of law.”

Selling steel products below cost in order to gain market share and harm domestic producers, known as “predatory dumping,” has hit workers, families, and communities on Minnesota’s Iron Range hard. The Iron Ore Alliance – a joint initiative between the United Steelworkers and U. S. Steel – has been working hard to support a fairer trade system that helps American steel manufacturers and industries thrive.

A piece of our industry is on display in Keewatin

On Tuesday, August 2, a taconite rock from the Minntac facility was delivered to the new Keewatin Community Center. The decorative rock was donated by U. S. Steel and is displayed prominently outside the building, located on the 200 block of 1st Street in downtown Keewatin. 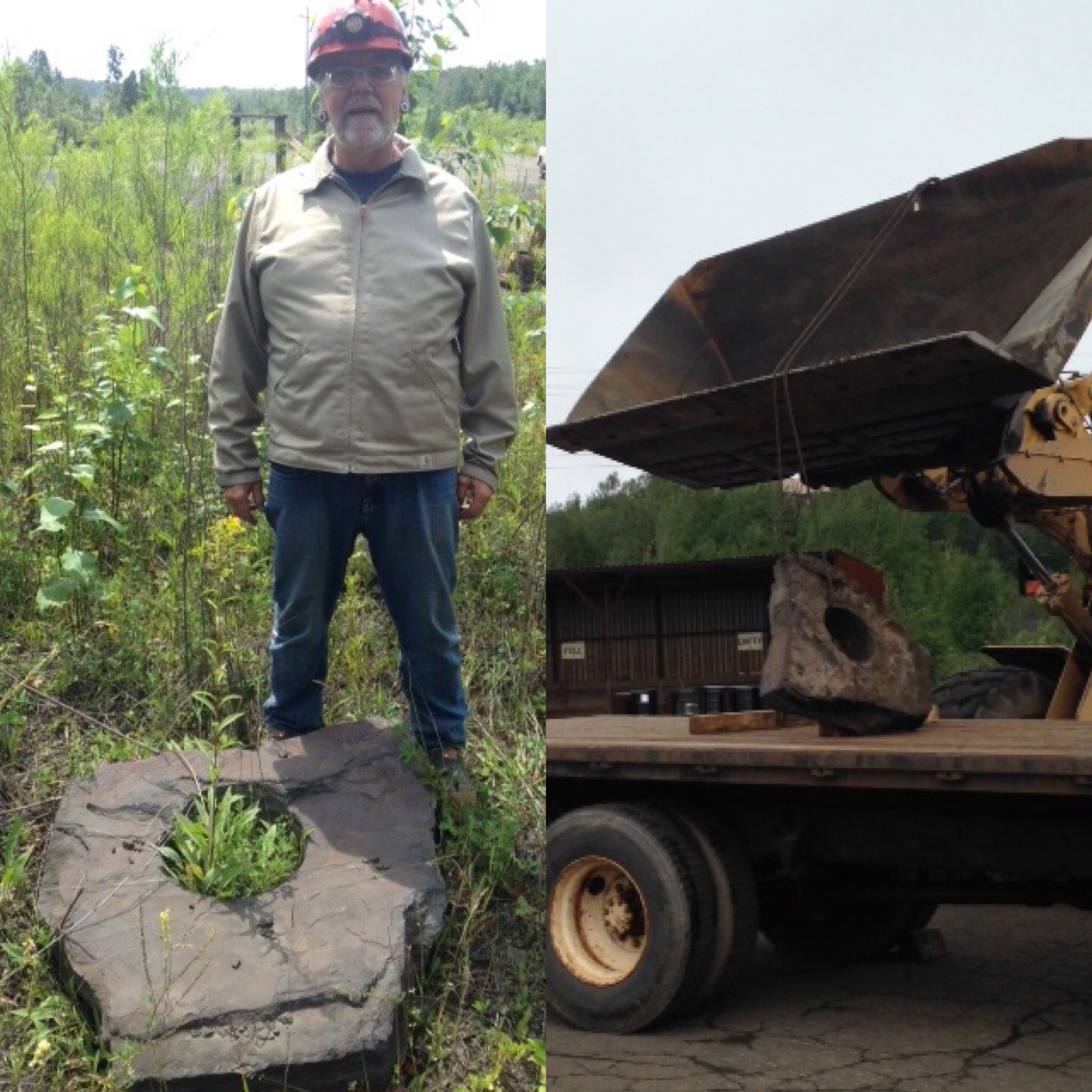 The Iron Ore Alliance is pleased to share that the U.S. International Trade Commission (USITC) announced today that it is beginning an investigation of carbon and alloy steel products being imported from China. The investigation is based on a complaint filed by U. S. Steel Corporation and supported by thousands of local, state and federal officials, trade associations, customers and suppliers, employees, and union members.

Read U. S. Steel’s statement on the investigation.

The Iron Ore Alliance is grateful for the widespread support from Minnesota stakeholders who are urging the U.S. International Trade Commission to initiate an investigation under section 337 of the Tariff Act of 1930. This trade case is critical to the future viability of Minnesota’s 130-year legacy of iron mining and the jobs it supports. Letters of support have been submitted by Minnesota state and local lawmakers, business groups, and trade organizations, including:

Iron Ore Alliance co-chairs John Rebrovich of the United Steelworkers and Chris Masciantonio of U. S. Steel also submitted a letter expressing their support for moving the case forward.

“Thousands of Minnesotans are currently living without any certainty about when or whether their jobs will come back as a result of illegal foreign steel dumping,” said Governor Dayton. “The International Trade Commission has the power to answer those questions while providing much-needed relief to an important American industry.”

Thank you to the elected officials, individuals, families and businesses that support a strong mining economy in Northeastern Minnesota. In the coming weeks, the International Trade Commission is expected announce its decision whether to initiate a case based on U. S. Steel’s complaint. Check back for more information and updates.