On April 26, 2016, U. S. Steel filed a complaint with the U.S. International Trade Commission (ITC) to initiate an investigation of the largest Chinese steel producers and their distributors under Section 337 of the Tariff Act of 1930. The complaint alleges three causes of action: the illegal conspiracy to fix prices, the theft of trade secrets, and the circumvention of trade duties by false labeling.

The United Steelworkers strongly support U. S. Steel’s actions and quickly issued a statement of support. United Steelworkers (USW) International President Leo W. Gerard said, “In recent months, more than 13,500 steelworkers have received layoff notices. Facilities are being shuttered, some never again to resume production. Families are being devastated and communities are suffering as their tax bases decline.”

Elected officials across the country and at all levels of government are taking action to ensure our country’s steel industry, including Minnesota’s mining industry, regains its strength. The Iron Ore Alliance is grateful for the support of Minnesotans and our elected officials who are fighting to end illegal and unfair trade practices.

United Steelworkers and U. S. Steel will continue working to support families, individuals, businesses and communities on the Iron Range during this time of need. In the coming weeks, the International Trade Commission is expected announce its decision whether to initiate a case based on U. S. Steel’s complaint. Check back for more information and updates on this development.

Thanks to the lawmakers who support our community

The 2016 legislative session began on March 8 with a lengthy discussion about the growing economic hardship on the Iron Range as a result of illegal foreign steel dumping. Although the full Legislature has yet to pass a 26-week extension of unemployment insurance benefits, we extend our heartfelt thanks and gratitude to the Governor and state legislators who are fighting for the families, businesses and communities on the Iron Range. The Iron Ore Alliance recently sent a letter of support for this legislation to all members of the Minnesota Senate and House. Click below to learn more about the proposed legislation.

According to new findings from the U.S. Department of Commerce, corrosion-resistant steel imports from China will be taxed at 256 percent due to ongoing sales at unfairly low prices. This is an important step in the right direction as we work to put an end to the illegal practices that are hurting America’s steel industry.

Steel is the backbone of our economy and is critical to economic and national security. It supports our bridges, takes our buildings to new heights, transports goods and services, and is found in everyday appliances in our homes. Minnesota is America’s largest producer of iron ore – a natural resource and key ingredient in the steelmaking process.

The Iron Ore Alliance calls on Minnesota House and Senate members to join us in the fight against illegal trade. Members can show their support by co-sponsoring a resolution calling on the U.S. Congress and President to forcefully address illegal trade practices that are severely impacting the iron mining industry, workforce, and communities in Northern Minnesota. 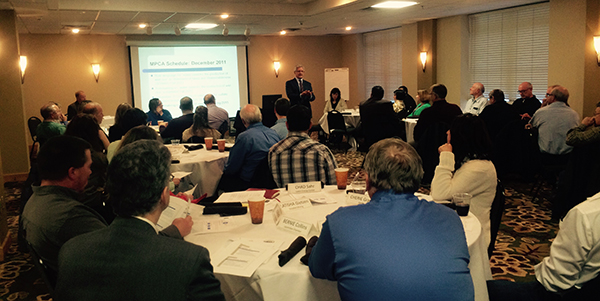 Minnesota is the only state with a rule limiting how much sulfate can be discharged into wild rice waters. This 42-year-old standard (10 milligrams per liter) is not consistently enforced and there has been significant discussion on whether the standard is scientifically supported. The MPCA intends to move ahead with rulemaking regarding the wild rice sulfate standard to reflect the most up-to-date science and to identify wild rice waters.

Click below to review the PowerPoint presentations that were provided at the January 14 meeting.

Minnesota has a 42-year-old rule limiting how much sulfate can be discharged into wild rice waters. The current standard of 10 milligrams per liter (mg/L) is not consistently enforced, and there has been significant discussion on whether the standard is scientifically supported. Minnesota is the only state with a wild rice sulfate standard.

Based on recent research, the MPCA has concluded that sulfate is not directly toxic to wild rice but that elevated sulfide can be toxic to wild rice. Under certain conditions, sulfate can be converted to sulfide in the sediment where wild rice grows. To replace the current 10 mg/L sulfate standard, the MPCA proposes a standard that takes into account the sulfide-producing characteristics of a water body and its sediment to calculate a “Protective Sulfate Concentration” to protect wild rice.

A key to the new standard is defining the toxicity of sulfide to wild rice. The MPCA funded research by University of Minnesota-Duluth Biologist Dr. John Pastor to address that issue. A peer review panel convened by the MPCA made seven specific recommendations to improve the accuracy of the results.

The study concluded that sulfide is significantly less toxic to wild rice than was indicated by Dr. Pastor’s tests, and not toxic at levels that typically exist in Minnesota wild rice waters. The study also confirmed that the presence of iron in the sediment where wild rice grows significantly reduces the toxicity of sulfide.

This new scientific evidence confirms that Minnesota’s current wild rice sulfate standard of 10 mg/L is wrong. The ramifications of enforcing an incorrect water quality standard are enormous and would negatively impact communities throughout our state.

The MPCA is accepting public comments on the wild rice sulfate standard until December 18. Share your thoughts with the MPCA through our action center.

The Iron Ore Alliance is grateful for the leadership of U.S. Senators Amy Klobuchar and Al Franken, Lieutenant Governor Tina Smith, and U.S. Representative Rick Nolan, who met last week with top administration officials at the White House in an effort to determine what immediate steps can be taken to stop mining and steel industry job losses stemming from declining iron ore prices and unfair dumping of foreign steel. These state leaders understand the importance of Minnesota’s taconite industry. Below are quotes from a press release issued last week by the Minnesota congressional delegation.

Senator Klobuchar: “Minnesota’s steelworkers can compete with anybody in the world when it comes to providing quality steel – but they need a level playing field. Today’s meeting focused on the need to stand up for the workers who help drive our economy forward by making it easier to crack down on illegal trade practices, and we will continue working to keep the Range strong.”

Senator Franken: Today, we pressed the White House and top U.S. trade and economic officials to understand what families and workers in Keewatin are going through, and to not only step up and help reverse the job losses that are happening in Minnesota, but to also let overseas competitors know that they can no longer unfairly dump their steel. Our steel industry needs a level playing field now.”

Lieutenant Governor Smith: “Minnesota produces 70 percent of the iron ore consumed in the United States at some of the best prices. We can compete with anyone in the world if we have fair play.”

Representative Rick Nolan: “Thousands of good paying mining jobs across the nation – including more than 450 on Minnesota’s Iron Range – are in jeopardy due to millions of tons of low-grade, foreign government-subsidized steel from Asia being dumped into the U.S. marketplace. Our message to the Administration is that now is the time to act before our domestic steel industry is lost entirely in a race to the bottom that’s jeopardizing jobs, our economy and our national security.”

Last Thursday, Keetac workers raised more than $1,200 for a local food shelf through its semiannual gate collection, where employees donate money as they enter the workplace. The funds raised for this gate collection were given to Neighbors Helping Neighbors, the food shelf in Nashwauk. In a recent article in the Hibbing Daily Tribune, Dan Pierce, president of United Steelworkers Local 2660, said, “With the recent downturn in the industry and the threats of layoffs here in May, I, as president, was nervous as to how the gate collection would go. After seeing how we did, I just want to say ‘thank you’ to all the people who work at Keetac – hourly and management – for putting aside our concerns to make sure that other people’s concerns are taken care of.” Click here to read the full story.

Minnesota’s iron ore mines contribute millions of dollars annually to Minnesota’s Permanent School Fund, which distributes money to every public school in the state. In 2014, U. S. Steel’s Minnesota Ore Operations contributed more than $37 million in royalty payments to the trust funds. This amounts to 84 percent of the total contributions in 2014.

Proposed Legislation Would Give Preference to American Steel

The Iron Ore Alliance supports proposed legislation that would require publicly funded construction and maintenance projects in Minnesota to give preference to American-manufactured iron, steel, and other manufactured goods. The Iron Range is where the steelmaking process begins, and the region provides high-quality, well-paying jobs to thousands of people. We hope the Minnesota Legislature will support this legislation that is important to the future viability of the taconite mining industry.

The United Way of Northeastern Minnesota presented the “Taconite Challenge Award” to the Minntac mining operation at the nonprofit’s annual campaign celebration dinner last week.  The traveling trophy is given annually to the mining facility with the highest employee participation in the United Way’s giving campaign.  Minntac, the single largest iron ore pelletizing operation in the United States, is operated by United States Steel Corporation with union members from United Steelworkers Local 1938 and 9115. In 2014, more than 67 percent of Minntac employees participated in the giving program, raising a total of $229,916 for local nonprofits that are dedicated to improving education, helping people achieve financial stability, promoting healthy lives, and strengthening families.